Well I finally found a time to see True Grit. Strange – I thought it was a good film; it…

Its hard to think of another good film about the unconscious mind – the only other ones I can think of are Eternal Sunshine of the Spotless Mind, The Cabinet of Dr Caligari, Hitchcock’s Spellbound, David Cronenberg’s Spider and Jacobs Ladder. Inception is far and away my favourite “mind movie” – so packed with intelligence and ideas, especially for a big blockbuster movie.

Here though I want to get into some of the ideas about the unconscious.

The idea of an “Inception” is to install an idea in a person’s unconscious without them being aware that you put it there. 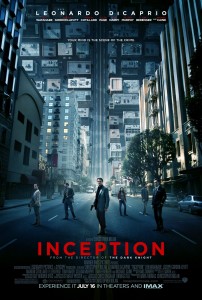 Which sounds very much like hypnosis – except strangely, for all the exploration in the film about influence and dreams, hypnosis is left out entirely. I suppose its justified in the context of the film, because hypnotising the target character is going to be tricky – he has had training to resist and avoid such things. Subliminals and priming aren’t going to be powerful enough either for such a big task.

But hypnosis would still be possible – and certainly more likely that going four dream layers down!

How would I do it?

Some possible requisites for a suggestible state would have to be incurred – which could include:
– creating a state of emotional automaticity (a state of wonder, or laughter for example)
– confusion where the unconscious mind is looking for an ‘escape’ by way of following a given command
– conscious overload – with too many things for the mind to attend to consciously, the unconscious is wide open to respond to influence.

There are plenty of methods to achieve these things – and once done, the thin end of a hypnotic wedge could be given that compounds into more and more responsiveness. Until his sense of conscious will is eroded entirely. Once in a deep enough state of suggestibility, a post-hypnotic command to return to the same state could be given.

Then, further fractionated inductions could easily be given, each time layering suggestions towards breaking up his Dad’s company (the task in the film). Suggestions could be associated to other real-world cues, so again and again the thought materialises in his mind as if from nowhere. With suggestions for amnesia, he would’t ever know the source of the ideas – it would be Inception.

The movie does deliver some acute truths about the mind, which I applaud it for.

The character Eames casually conveys that the relationship with the father is one of the most powerful sources of unconscious influence, and he’s pretty spot on with that. The wind-mill idea was brilliant as a visual motif for this.

The exploration of subjectivity was interesting – the dreaming/not-dreaming insecurity of Cobb, and also how he comes to realise that his imagination of Mal isn’t actually Mal – its just his imagination. How often do people exist more in our imaginations than in real life? I really appreciated this, especially as part of his cathartic self-awareness.

I also really admired the dual nature of the films trajectory. All the while he is trying to perform the inception, he’s also undergoing his own kind of therapy – dealing with his unconscious issues and slowly moving towards his ultimate terrifying truths which will ultimately set him free (allowing him to let go of the guilt of his wife’s death). This dual trajectory is a nice reflection of the therapy situation – where both practitioner and client move along their own trajectories in unison. What the film does brilliantly is to entwine the two against subjective reality, so you never really know where you stand – just like in a dream.

It also has a brilliant, dreamy soundtrack which I’ve listened to a whole bunch of times.

If you saw the movie, what did you think?