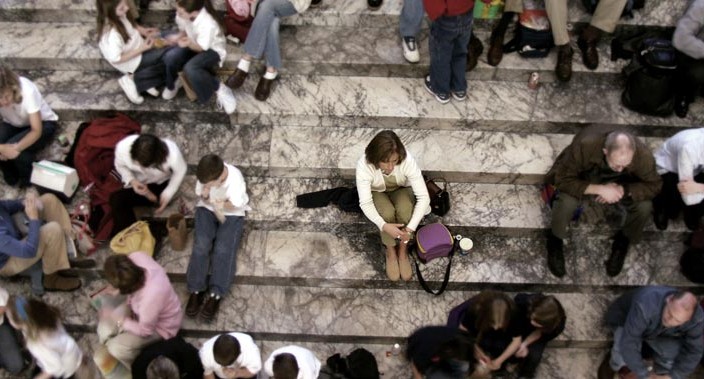 Years ago I knew this guy who was your typical laddy bloke – extrovert, a loud laugh, confident, fitted in well, played sports, enjoyed banter and going out, got overly excited about new Bond movies – that kind of thing. He met a girl at University, they’re still together, and he became a solicitor. But one late drunken night back then, after some pointless argument about something, he shared a secret with me.

He confessed that he frequently fell into a secret depression, and would just “check out” of himself.

He’d find himself sat at his piano, staring at the keys, not having a clue who he really was or whether his life made any sense. He wouldn’t know what to do next, or why, and would just sit there, confused and feeling like he didn’t really care about himself.

We never really talked about it again, it was like he never mentioned it (maybe he even forgot, or his mind erased it). I assumed he’d be uncomfortable with someone knowing about this side of him, preferring to pretend that he hadn’t really brought it up. So he could carry on maintaining his facade without fear of someone breaching it.

I wasn’t equipped with enough awareness or emotional experience back then to know what to really do with it, how to show empathy or even have the courage to explain how much I could relate.

It was just so incongruent and opposite to how he lived day to day – but it did explain the uncomfortable tension he seemed to project about him – confidence mixed with anxiety. I’d bought too much into the impression that people make, without learning that often, inside is completely different.

But I started to see it in him.

I could see around the edges of the facade now. I could see the occasional staring into space, the micro-expressions of sheer panic, anxiety and fear within the banter. Later through study I’d learn how even small things like his “hell-oo–0000” greetings were a sign of hypomania, the distraction flipside of depression.

The times when he’d be overly sensitive to being left out of something, and want to join in or come along even if it wasn’t his thing.

How he’d tread a delicate line of anxiety and nervousness beneath the carefully controlled extroversion.

More recently, I found him again on Facebook. A bit of banter, usual nonsense, usual pictures sharing social “good times” with friends in bars and that kind of thing.

Except there was that familiar strange thing with his smile, all these years later. That strange unconscious feeling of “something amiss”, that I could never put my finger on to explain why I could never really trust this guy was being authentic.

So on my laptop screen, I covered up his smiling mouth with my thumb.

And there it was, the answer, his secret, all this time hiding there in the most obvious place of all.

His eyes looked out with a dead, emotionless stare.  As if his soul was so far away that these windows into it just disappeared into darkness.

With the smile covered up, you’d never know he was smiling. The eyes were depressed, tired, and lost. The usual automatic muscle contractions of a genuine, heartfelt smile were absent around the eyes where they should be.

It was a scary thought, to wonder just how much of the extrovert, distracting and outwardly side of him was actually just a huge defense mechanism, an evolved system to cope with life.

An even scarier thought was how many other people share scary feelings that they don’t feel able to talk about or deal with.

An even scarier thought still was, just like back then, how much I could relate to this side of him.

But by this point, I had seen enough examples – too many examples – to realise that this wasn’t an exception, some rare condition.

It was actually far too common.

A black hole in the mind

Once I was chatting to a client who worked in advertising. He was actually a director of the agency, and was the stereotype of a confident, successful advertising man.

Eventually he got to talking about a “blackness” that just consumed him once in a while.

Like his brain was resetting. He would just become lost, hopeless, distant, withdrawn.

His wife was well aware of it, and they’d developed a system where he’d just go off to be on his own and get through it when it happened.

I’ve heard pretty much the same exact story from a number of men, and its not uncommon.

Yet each person feels like they’re the only one – harboring this secret dark issue that seems embarrassing or weak to share or talk about. We believe its not manly to talk about such things. Its not strong, its not attractive. Such feelings should be repressed, denied, locked up in a small box of the mind where it won’t affect anything.

So secret and silent are these commonplace issues that we’re still uncomfortable talking about things like shame or depression.

I’ve lived a varied life, had many amazing experiences, learned a whole load of stuff, made some great friends, and felt loved.

Yet I rarely let any of it in, which I annoy myself with. I won’t hide away for a second from my own experiences of shame based anxiety.

I know all too well what it means to wake in the early hours, with lucid thoughts of panic fresh on my mind until sunlight begins to creep through.

Mysterious tiredness that drains all pro-action, hope and emotion from the day.

I have also had my fair share of depressive, impatient days and moments of regret from snapping aggressively at people or situations.

Not being able to control the defensive surge that follows, where even though I know I’m in the wrong I try to protect my illusory ego anyway by making excuses – only to make myself and anyone else involved feel much worse in the process.

Watching all these moments of destruction and emotional waste pile up around yourself is a miserable thing indeed – and yet these are just subtle moments with very little magnitude.

Once the long-term consequences of anxiety start to show themselves, the various vicious circles of emotional, financial and spiritual despair can really give meaning to the term “hell on earth”.

And I have certainly compared my life with imagined alternates which cast a long dark shadow over some of my decisions or phases stuck in procrastination.

When I do feel happy, I sometimes slip back into residual shame for “coasting”, for not working at something, or suffering, or being more concerned with someone else who is going through something difficult. It feels ignorant and risky, life is surely going to catch up with me and “bring me down a peg or two” for being so complacent.

Maybe being “happy” or content have been associated with shame, as part of an accidental shame identity taught sometime in my childhood (which is always possible if your parents were always busying about, suffering in some way, or seemingly discontent). So the idea of feeling happy is automatically associated with shame.

But then when I’m depressed or frustrated, I feel just as shameful for not being more grateful for what I have.

Sometimes when I’m happy I get suspicious that I’m just covering up a deeper depression, distracting myself, procrastinating.

Its rare that I feel truly happy – only sometimes when I’m with a great friend do I feel I’m in the right place at the right time, or if I’m out enjoying a good long walk or bike-ride amongst nature.

Most of the other times I act normal and “together” but really feel frustrated, bored, and slightly depressed.

I feel like I haven’t achieved enough. Even writing that, I just felt a sudden urge to say “I have though!” and list a few things – but that urge absolutely came from a place of shame, wanting to hide itself by proving myself. I think most of the times I do do something good or achieving its probably fueled by a desire to lessen the impact of shame – to try and prove that I am good enough.

But its never enough – there’s never a day where I think “right, I’ve proved it! Job done!”

Its an ongoing saga, constantly draining me of energy, holding me back in various ways, and tripping me up.

That constant fear of not being good enough, being found out, not belonging, being disconnected.

What if I’m forgetting something that’s going to catch up with me?

What if I’m really fucking my life up?

I used to be able to really relate to that feeling that someone is about to knock at the door and say “Time’s up. Game over. You need to come with us”. Its a strange anxiety felt by many, of being a fraud, that you’re not really supposed to be just trying to live a life like everyone else.

“How dare you try and fit in among us, the real people!”

These days I’ve progressed further along my journey of self-awareness and dealing with strange thoughts and feelings like this. But I’m not out of the woods, its all part of being human.