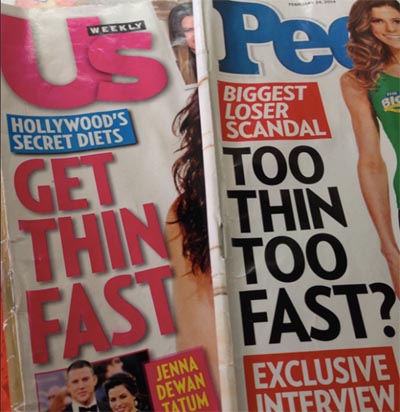 Here’s a nice example of how magazines like this are written to feed off your shame levels. Get thin fast! But not too fast, or you’ll be like the “biggest loser”. As if the covers weren’t bad enough, once you see whats inside then your shame levels will be manipulated even more so you buy the shit that’s being advertised.

Now this is just as relevant to guys as it is to women. Because our magazines are just as shame-mongering in their quest to get you to buy some information towards something that you’re lacking.

You’re too ignorant about what the opposite sex thinks.

You’re not in the know like everyone else who has read the exclusive.

Have a glance through some of the headlines here and see how ridiculous it looks en masse (opens in new tab).

(My favourite is “Kegels – the most important five minutes of your day”. Not, you know, being with your loved ones or anything like that).

The magazines might as well be called “read gossip for half an hour and end up feeling shitter about yourself”.

Hey! You there! I just wanted to say that you’re good enough. Don’t believe what they say.

You’re lovable – and you don’t need any of the stuff they’re pushing to prove that to someone.