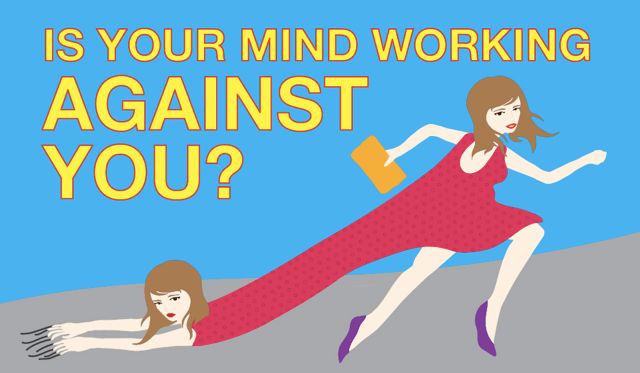 I pondered about this subject myself. It seems to me self-sabotaging is an anticipatory subconscious action because in childhood I…

The Hidden Handbrake – often, we’re our own worst enemies. We manage to somehow keep the things we really want just the right distance away so we never actually grab hold of them – whether a career position, goal, creative project or anything else. Why do people do this?

I call it the hidden handbrake because its literally like driving a car with the handbrake on – you sense your inner potential, you know you can do (and achieve) better, but for some reason an endless chain of setbacks and stupid decisions ensures that you never make the most of yourself.

The problem with subconsicous self-sabotage is that it can take years if not decades to realise its full effects. The mind rationalises that its something or someone elses fault, for as long as it can to protect your ego. But sooner or later, the patterns become so obvious, and the feedback from others so compelling unarguable, that you can’t help but look inward rather than outward for excuses. Examples may be a string of relationships, a string of jobs, giving up a project just before it could become successful, or endless procrastination.

I think a couple of the most common reasons are that people feel they either don’t deserve to be successful, or don’t deserve to be happy. When happiness happens, some people find it so uncomfortable that they do their best to ruin it. Same with success. Its the common cliche of the guy who gets a well paid job in the city, turns to gambling and cocaine, gets fired, wonder how the hell it all went wrong.

In my experience, its very difficult to pinpoint the causes of your own self-sabotage because its so hidden. An intricate network of self-beliefs and expectations that make up the self-image (your blueprint of what you expect for yourself) can rest on a myriad of beliefs – which are powerful because they are emotionally charged. Somewhere, an association exists between ideas of success, attention or happiness and guilt, shame or fear.

Goal-setting is an ever popular theme of self-help and get-rich-quick books.

“Visualise what you want – feel it – make it bigger, brighter – want it and you can attract it into your life!”

Hmm, maybe. But what I suspect the excited, hope-addicted readers of such books achieve instead, is the art of firmly grasping that stick with a dangling carrot and walking around in circles with it.

Actions speak louder (and condition the subconscious more successfully) than words. Figure out the steps that you need to take to achieve what you think you want to achieve. Carry them out and be aware of how if feels. Fantastic? Good – keep going until something else kicks in. The moment you start to want to give up, change direction or make a stupid decision – think about what outcome you would prefer and why. Who do you imagine you are pleasing in this scenario? Who do you imagine is watching over you? What is the child in you saying about it?

Everyone’s situation is different, so this is really just to stimulate some thought.

If you feel you self-sabotage, whether you know the causes or not, please do share and tell us about it. I would love to see some real-world examples. If you managed to do anything about it, that would be great to read about too.