1
Derren Brown: Enigma Review and Blog
2
Lie To Me

I agree with your critique, entirely. I noticed these things to a degree, but your criticism fleshes out my peeves.… 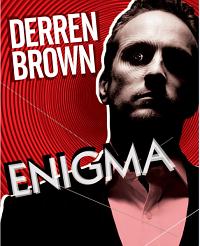 IF YOU’VE SEEN THE SHOW then please leave your analysis, ideas, observations, reviews etc in the forum / blog bit below, ESPECIALLY if you were chosen for anything!!

THE BELOW COMMENTS CONTAIN SPOILERS so please don’t read them unless you enjoy indulging in the fun of trying to analyse/figure out the tricks.

SERIOUSLY! After a short time, people’s contributions escalated, all in the name of a bit of fun, trying to figure out how various routines were done. Its massively spoilery, so please click away if this kind of thing annoys you.

My Review of the show:

Personally, Derren’s recent work has been a bit too tricksy for my liking – the frenetic running about with clipboards, envelopes, pens etc just screams ‘IRRITATING TRICKERY!’ and doesn’t capture the psychological intrigue of his earlier work. In fact, I would go as far to say that Derren has broken the rule he spelled out in Pure Effect, the need to convince the audience of the ‘process’ you are pretending to use for the illusion. Ever since Something Wicked This Way Comes, I don’t think “Wow – he’s reading their body language! How interesting, that people give away so much!” I just think “oh – its a trick”. In Some ways, I think its hypocritical of Derren to be so tricksy – because as Derren keeps campaigning about (for example in Confessions of a Conjuror) isn’t psychology and human behaviour fascinating enough, that we shouldn’t have to resort to lies and deception to create wonder? This is the argument he makes against psychics, but surely he’s in exactly the same boat by being a magician who pretends the trick works because of psychology.

I know you may think “oh its all entertainment! Chill out!” and you’d be right. But… I still think there is something a bit cringeworthy about dressing up blatant trickery as psychology. We can accept that Uri Geller is full of shit, because we know rationally that mystical nonsense is exactly that. But When people ending up (and there are plenty of them) end up thinking he can “implant ideas” and “read peoples thoughts” etc etc, his bullshit has overstepped a mark. Seeing him onstage talking about his dead grandfather… making some women from the back of the theatre cry on stage with her freshly engraved coin… I don’t know, it just makes me cringe. But thats just me.

Anyway, the first half of Enigma was very tricksy, the usual running around reminding the audience of whats happening, frisbees, marker pens, and then gasps of delight as various things are turned around to reveal something. As well as the virtuoso showmanship (not just the usual charismatic presentation but the acting, deception etc) I did love the humour of these shows, in fact they could be classed more accurately as comedy magic than psychological magic. Many moments had me laughing out loud. The tricksy-tricksy was redeemed ever-so-slightly in the second half, where Derren seemingly uses genuine hypnosis (although still could be the pseudo, self-conscious group-psychology fuelled ‘bow your head, look hypnotised and write something on this clipboard that I can use as a trick’ hypnosis that hes used in stageshows before.) I thought there were laws in Britain about public hypnosis acts anyway, perhaps he gets away with it by not using the word. A spirit cabinet routine similar to Seance was excellent as live entertainment, very visual and interesting. The problem here is that Derren’s rushing about strips it of the potential wonder and intrigue it could have had – had he framed it more patiently, it would have been a lot more eerie. On the whole though, although slightly flawed, very rushed and annoyingly tricksy in places, its very funny and interesting enough to make it worthwhile as live entertainment. Far shitter on the televised version, I have to say.

Blessed are Fox Broadcasting for knocking out another belter of a show.

Lie to Me stars Tim Roth (Mr Orange in Reservoir Dogs, an excellent British actor) and follows the endlessly interesting day job of an expert in body language and lie detection.

Puzzles are solved in a format similar to CSI, your first impressions of a situation gradually evolve during an episode to reveal an unpredictable twist of events.

Its based on the work of Paul Ekman, whose books Telling Lies and Emotions Revealed are recommended for anyone interested in observational psychology.

I love this show – its brilliant fun for its body-reading knowledge, as well as some excellent lessons in perception, subjectivity, and balancing what you think you know with what is actually true.

Have you seen it? What do you think?