Our Minds are Suggestible

Our level of suggestibility to outside influence is highest at times when our conscious attention is minimised. When we aren’t in a good position to judge or evaluate what is going on around us. This would include periods of extreme tiredness, being out of our comfort zones, the whole of infancy, or living in todays confusing and fearful world.

During these times, many suggestions, ideas, thoughts or attitudes can ‘sink in’, from friends, magazines, parents, teachers, politicians, outside influences etc. You could think of your mind as being like a computer, installed with software by everyone and everything except you!

Associations run through our subconscious minds in ways we aren’t always consciously aware of. Suggestions can often be felt in exactly the same way as they were learned, whether positive or negative. For example, how often do you feel ‘I can’t do that’ or ‘I’m not good enough’ when you want to do something, but feel discouraged. You know it’s rationality – the conscious consistency thing going on again, because logically, you know that you could do it! Replace that talk with ‘I can do it’. Sometimes in hypnotherapy, someone’s limiting behaviour, attitude or anxiety often comes down to a particular assumption or piece of self-talk, running over and over like a computer program. When it’s ‘deleted’ or substituted for something more powerful and constructive, the positive effects are obvious.

The analogy of computers may seem a little corny, but you get the idea. To continue with it, you could think about your conscious awareness as being like a computer screen, only showing what is running at any one time. Everything else runs in the background. 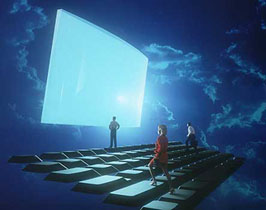 Hypnotherapy is like going into the system, analysing what is there, and doing a clean up by carrying out particular actions that the user wants. It can be extremely rewarding to be aware of the programming that controls and influences most of our behaviours. When I first started to experience hypnosis in training, I was amazed at the things that came to mind. They are psychological experiences and realisations that only make sense once they’re recognised and the effects are felt.

The main idea I want you to absorb now is that we can’t always choose the programs that end up running our attitudes, beliefs, thoughts and behaviours. Not unless we choose to choose them. Then, you get to choose who you are, instead of the outside world choosing for you.

If that can happen with a phone number, what do you think will happen with the comments or suggestions that people make? It is no surprise that people who surround themselves with grumpy, negative and self-centred people end up being the same way. Comments like ‘what’s the point’, ‘you can’t trust anyone’, ‘you wont get anywhere’ etc eventually end up in your subconscious. Similarly people who answer ‘how are you?’ with ‘not bad’ limit themselves to not feeling good either. Again the same system of suggestion can be used for positive ends. Being positive around friends could easily lift them out of a slump. If you have a friend who is feeling a bit down or bluesy, try this little suggestion. Ask them to remind you of something that you know they enjoy a lot, whether it is something they do regularly, or something recent like a holiday. In telling you about it, they will likely summon all of the feelings and associations that go with the thought or memory, and these will gradually flood out the negative self-talk.

But if you find people are constantly bringing you down with negative talk, useless cynical comments about other people, the weather, the boss, or themselves, be careful how you respond. Always agreeing with such things can seriously affect your own attitudes, feelings and beliefs. The things we believe about each other are incredibly powerful in shaping behaviour. They are like self-fulfilling prophecies. If you think about it, this could also be used to work for you instead of against.

A lot of our behaviour is shaped by what we believe. Beliefs can come from all sorts of places, whether peoples attitudes, hypnotic learnings or ways to justify certain behaviours (e.g. someone who is depressed may ‘believe’ that there is nothing good in the world).

When people have personal limitations, whether it is lack of patience or understanding in relationships, aggressive tendencies at work, or self-doubt, there is usually an underlying belief that makes it so. For example, self-doubt is usually caused by a belief along the lines of ‘I am no good’. A smoking habit could be backed up with a belief that they couldn’t quit, or that it would be painful. That belief probably wasn’t chosen, but was ‘given’ by a situation, expectation or attitude.

Isn’t it amazing to think how our lives could be affected by deep down beliefs that we didn’t even want? But they are extremely powerful.

Of course, you may argue that all of this nonsense is my belief, and that I am limiting myself to the possibility that we are all actually very consciously aware and have a lot of self control. I would respect that (but secretly be wondering why we aren’t all happier, more successful, and free of fears and addictions?)

So who are you, really?

You may identify yourself with what you do, what you own, how much money you have, who you know, where you’ve been, perhaps even what you think or look like. But are any of these really who you are? Have you ever stopped to think about why you do the things you do or have gotten to where you are right now?

For example, how much are you influenced by:

You may then start to wonder – who would you be if those experiences were different? Would you really be exactly the same?

Most underlying attitudes, beliefs, expectations or assumptions can be explored and identified through self-awareness training or hypnotherapy. It is amazing how often a personal limitation can be reduced to a simple expectation about something that was sat deep down in the subconscious. Once it’s realised, it is exposed to your conscious judgement where it can be thrown out, or replaced with something more worthwhile. Change doesn’t have to be a long process that takes years of talk. The simple, powerful moments in hypnotherapy of self-awareness and realisation can change beliefs, attitudes or expectations very rapidly.