The self image is a very valuable area to learn about as it influences everyone. If you really begin to grasp and understand it, you will have opened a new door to self-awareness and personal improvement. And it will save you shelves of self-help books, as many are based around this

What is the Self Image?

Every one has a subconscious perception of themselves, including you. This doesn’t resemble the last passport photo you wasted money on, only to use one and throw the rest away. It is far more involved and emotional. It shapes what you expect from yourself, what you believe you’re capable of, how you see yourself fitting in and belonging to the world. It shapes what you believe others expect from you.

When you think of yourself, you may have many associations of yourself in different situations, maybe appearing big or small, animated or still, noisy or quiet, smiling or sad, feeling confident or shy. It is difficult to become completely aware of your self image, but you may get glimpses in certain situations. These perceptions are subconscious, but you may be able to feel them. To be totally honest, your life right now is probably an accurate reflection of your self image. Throughout life we gradually move towards our self-expectations.

The self image is very complex and detailed, involving how we think we look, what we think our different facial expressions look like, what our voice sounds like, what we think others think of us. There are many variables. More telling, is how we feel we would respond or behave in particular situations. If you picture yourself now meeting someone for the first time, how do you imagine yourself?

Where does it come from?

How we see ourselves forms through experiences, feelings, and what people tell us about who we are. The way we act shapes the way people respond to us – which in turn influences what we beleive about ourselves and ultimately expect of ourselves. Consider a situation where a child behaves confidently, or shyly. In world A, people remark to the child how confident she is, regularly and repetitively. In world B, they remark instead to how shy she is, expecting her to be shy in all situations. It is obvious that in world A, the child has a good chance of growing up to be confident, and in world B, shy. The example is perhaps oversimplified, but the formation of the self-image can rely on simple innocuous things like this. A simple occasion such as a family event, and the mum saying “oh, shes gone all shy” could offer a powerful suggestion, influencing what the girl believes her mum expects from her. “I’m a shy person” she’ll think, subconsciously.

Particular experiences can go a long way to shaping the self image. If someone achieves something incredible, and doesn’t tell anyone, the self image may not change. If they were celebrated by many friends and family for achieving, this may then develop the self image towards high self esteem and confidence. The stimulation we receive about ourselves affects how we see ourselves. When someone insults or judges our character, it can feel far more hurtful than it seems, because it could knock our self image. 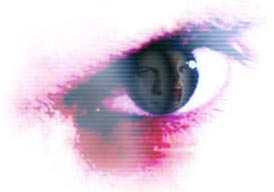 How your Self Image affects you

The self image is hugely influential on your entire life. When the self image begins to develop through experience, it then begins to drive us. It creates an expectation of ourselves, of how we expect ourselves to be. And as mentioned elsewhere on the site, expectations are like self-fulfilling prophecies. The subconscious works hard to maintain and protect the self image. It uses it as the blueprint of how to be. So if someone sees themselves as being successful and happy, they will subconsciously be directed and compelled towards actions that will lead to this. Anything else would lead to subconscious discomfort, which the mind moves away from.

The negative side to this is that unfortunately not all self images are positive. People have experiences that create enduring self images of guilt, suffering, depression, or failure.

If someone has a self image of failure, it follows that to be successful would be subconsciously uncomfortable. It doesn’t match the subconscious image. Such people may consciously talk of wanting success, even plan their way towards it, but deep down they are feeling uncomfortable with the idea. Sure enough, the subconscious finds a way to sabotage the conscious efforts, and failure eventually ensues. You may know people who seem to do so well, only to ruin it at the last minute. This is common when people suddenly receive fame, recognition or money. If their self-image and self-expectations don’t match it, they will feel uncomfortable, and ultimately throw it away. It could be drugs, bad behaviour, bad decisions, bad investments – but ultimately they end up where they started.

A self image of rejection is also common. Family break ups or difficult separations can lead to an expectation of rejection. It is then difficult to actually be accepted by someone, because it goes against the expectation and creates discomfort. Such people tend to push people away in relationships to avoid the discomfort of acceptance, or create a situation where rejection is inevitable (such as infidelity).

A self image of guilt may be caused by being implicitly blamed for difficult circumstances, overly punished or dominated by authority figures during childhood. It is incredibly difficult to shake feelings of guilt, regardless of how ‘correct’ or law-abiding you are. You simply don’t feel worth it. Subconsciously, it feels more comfortable to feel guilty than not, as this has been learned.

The self image is incredibly powerful. Every subconscious thought, feeling and behaviour is conjured in line with the self image, so whatever it is eventually turns into a reality. It is the norm to live towards, regardless of how it may seem consciously. The distractions of mid-life with family and work progressions can often stall the self-image temporarily, but it always comes back to achieve its goals.

Consider the successful business person who can’t quite accept their own success. They throw money at material possessions, and buy expensive gifts. But deep down, they don’t feel comfortable with what they have, it doesn’t quite fit with how they see themselves inside. They may become self-destructive, turning to drugs or expensive vices. They may turn to small scale corruption at work, trying to swindle colleagues or partners. Deep down, they are simply trying to ruin their life, to bring it more in line with how they see it deep down.

Of course, there are many successful people who enjoy their success exactly as it is. They aren’t as emotionally conflicted about themselves because they are in self rapport. Why? Because their self image was successful to begin with! They expected it. And because of the power of the subconscious, they didn’t really have a choice about being successful. They didn’t even have to really think about it, they just did the necessary work and made the right thoughts or behaviours at the right time. How? Because the subconscious knows how to get what it wants. And it knows what it wants. Comfort. The realisation of what is expected.

I wont try to ram this idea into your head. I will simply state it briefly, allowing you to come to your own realisations.

It is possible to change your self image – and this is what forms the backbone of the whole self-help industry.

Some books and seminars claim to help people become more successful, but all they really do is continually reinforce a negative self-image. A person left wanting more is not a person who is actually doing or getting what they want. Poor self-images fuel the billion dollar industry through repeat business and dependency. Which is a shame.