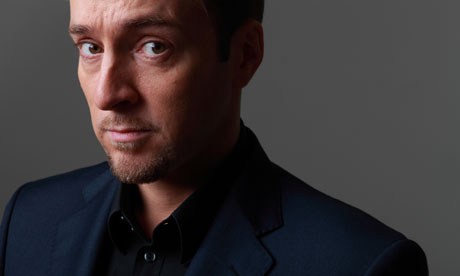 Hi Eni, Thanks for your response! Its really difficult to get stuck into something like this without getting misunderstood -…

Derren Brown is an extremely talented guy, clearly intelligent and thoughtful, and probably the most prolific person I’m aware of in showbusiness. I wonder sometimes if there are five Derrens made in a superted style factory somewhere, all churning out their multiple live shows, series, paintings and what-not.

But, over the years, a slight hypocrisy has emerged which I just can’t shake off, and as much as I want to side with Derren, I just can’t.

Its a difficult thing to discuss, because everyone has their (usually quite energised) take on things – spouting out anything from “its all just fun!” to “he’s psychic!” to “he’s just a magician – everyone knows its not real!” I would say all of these generalised ways of reducing what he does are inaccurate.

So here’s my problem.

Derren does a mixture of magic, misdirection, suggestion and showmanship. We all know that. However, the cleverness is in how something that looks like its psychological is actually a trick. That’s straightforward – most reasonably aware people have realised that. Uri Geller pretended his tricks were caused by mystic energies, David Blane pretended his tricks were caused by him being some kind of chosen messiah, Derren pretends his tricks are caused by psychological influence. Its more fun than simply saying “its a trick! LOLZ” because the mechanism of the trick is far more buried if you’re happily distracted onto thinking about psychology, NLP, suggestion etc. People think “wow, is that possible? It must be!” Its made all the more powerful (and confusing) of course by the fact that Derren does mix genuine hypnosis and suggestion in with the tricks.

See this clip for example:

In it, Derren pretends to guess the letter that Judy thinks of. To the casual watcher, it looks like mind-reading, or subliminal suggestion, or whatever else. Some will think that Derren “implants” the letter in her mind, others will think that he somehow psychically “knows” whatever she thinks of. Maybe its a subtle body language cue he picks up on. They may then think “wow, its possible to influence someone without them knowing”, or “people have no freewill! Derren is able to manipulate them!”

Such people of course would be the usual victims of Derren’s misdirection. Its a trick! Derren uses what is called a “gimmick”, a crafted-for-magicians device. In this case its a small envelope with carbon paper inside. Here’s how it works:

Derren pretends to write the letter on the card.
He places it into the envelope.
He holds the envelope in a strange, unnatural way so his thumb is pressed on the other side (able to imprint onto the carbon paper).
When Judy tells him the letter, he has a second to write (with his thumbtip – possibly holding a blunt instrument) the letter she says.
He gives himself longer by verifying what she has said (“A for apple?”)
He then does a strange, unnatural movement where he gets rid of his thumbtip instrument behind his back.
He then takes out the card, to show them the letter “A”.
He immediately excuses the strange wobbly writing by saying that he wrote it behind his back. Which of course, he didn’t! Its wobbly because he wrote it with his thumb – no one writes an A like that.

Now thats standard mentalism – do a trick, pretend its mental, and you look like some kind of psychological wizard. With standard mentalists though, there is something in the presentation that says “actually guys, you know its all magic, but lets have some fun”. So they pretend to be overtly psychic or something, so you know that its just a nice illusion. Derren though takes it to the edge where you might really think its all down to psychology. (If at this point you’re thinking “don’t be ridiculous! Everyone knows its a trick!” then you’d be wrong – many people don’t).

Now, on its own, that would be one thing.

The problem comes with Derren’s fierce backlash against other people manipulating the creation of a belief system. Psychics etc.

Now, I despise the psychic industry, and whilst its ok under the guise of “entertainment” there are too many “psychics” out there pretending to channel the dead, influence peoples life decisions. And some people are really vulnerable to that kind of influence.

But I find it difficult to see the difference between that kind of thing, and what Derren does. He’s just as phoney – using trickery to make himself appear to be using psychological skills (admittedly he is very psychologically skilled, but often in a very different way to how he is making out). You may argue “but psychics influence peoples lives, Derren just entertains”. But that would be wrong! Derren reaches a much wider audience and influences peoples’s lives with the false idea that hypnosis, suggestion, NLP etc can create the illusions he suggests it can.

I really admire Derren, and find him a down-to-earth and likeable guy. I also love his work that shows encourages people to question belief systems (e.g. “Messiah”) or the nature of influence (“The System”, “Heist”). But when he’s doing magic tricks and pretending them to be psychological, there’s something painfully trite about it.

What do you think?