I enjoy collecting rare hypnosis books and oddities. Some of the older retro books are great fun for their sense of vintage atmosphere and enthusiasm. Its a shame that the best substantial books (like Milton Erickon’s Hypnotic Realities) are difficult to get hold of these days, whilst the introductory watered down books are everywhere.

Some of my favourite hypnosis books:
Transforming Therapy by Gil Boyne. I trained with Gil just before he died, and really like his style. He blends an excellent understanding of hypnosis (he loved his rapid inductions) with gestalt therapy and great emotional work. His case studies (some are in the book) are absolutely fascinating for their efficiency and results.
Open to Suggestion, by Robert Temple. This was one of the first hypnosis books I got really stuck into. Temple is a layman, a hypnosis enthusiast, who basically researches and explores various areas and reports on them. His intrigue and enthusiasm are contagious, if you’re curious about hypnosis then he’s done all the work for you. It won’t teach you much about inductions but it gives a great overview of its uses and the nature of suggestibility.
Hypnotic Realities, by Milton Erickson. Milton was studied intensely during the development of NLP – but I find his books are much richer than the “distilled” versions that Bandler and Grinder put out. I would rather learn from the transcripts, and the intents behind them, than the raw, clinical language patterns which can seem a bit pithy out of context. Erickson’s works are brilliant.
Wake Up And Live, by Dorothea Brande. Not specifically about hypnosis, but a core feature of hypnosis lies is at the apex of this book. Its an excellent and relevant wake up call to living without fear of failure, and the positive benefits of doing so.
Findings in Hypnosis, by Dave Elman. Dave Elman was a true master – he somehow had an innate awareness for how suggestion worked and was able to wield it in really interesting ways, whilst always being down to earth and humble about it. He covers waking suggestion, somnambulism, therapy with ease, and has a really infectious enthusiasm.

Below are some rare hypnosis books, various bits and bobs that people interested in hypnosis or NLP might find interesting (everyone else will probably just think its a bit geeky and odd). I have watermarked some images because cheeky hypnosis sorts were stealing them.

This retro-oddity isn’t a book, but a spinning hypnosis spiral. To see the blurb that was written to go along with it, see the hypnosis spirals page here. 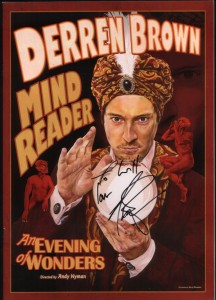 This was from meeting Derren in Plymouth (I met him twice, he’s exceptionally polite. I’d say his early Derren Brown: Mind Control specials on TV were a big influence on me as well as many others, even if he was cheating most of the time). 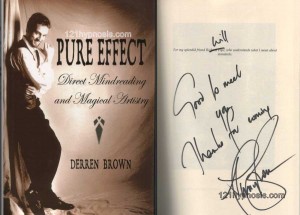 Derren Brown’s Pure Effect is a rarity and a great book. The dedication reads “To my splendid friend Richard Pope, who understands what I mean about standards.” Derrens books, including Absolute Magic and the more widely available ‘Tricks of the Mind’ are excellent reads and very witty. The subtle information about suggestion and forming in impression is just as relevant to a therapy professional as a magician – there are huge overlaps between the two in terms of suggestion and implying ideas. 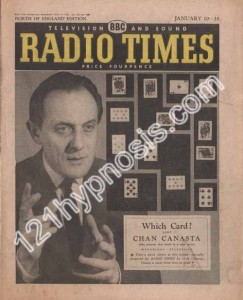 An original Radiotimes from 1960 featuring Chan Canasta – this is the guy who inspired Derren Brown (interestingly, slightly similar pose to Mind Reader above). The card he thinks you’re thinking of here is 5 of Spades. I have a rare TV episode of his, and his blend of showmanship, trickery and charm is very Derren Brownish. Excellent stuff. Chan, like Derren, was also an accomplished painter. You can buy a great Chan Canasta image here.

Chan Canasta’s Book of Oopses – a collection of mind puzzles and visual tricks. Insanely rare, I once saw an unsigned tatty copy sell for over £300. Derren once said he’d buy the signed one from me. 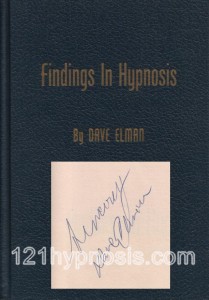 Dave Elman was a great down-to-earth hypnotist and hero of mine, with a fascinating life story. He taught hypnosis to thousands of doctors. He got involved with the CIA after seeing a light flashing from a highrise office in a skyscraper opposite his radio building in Manhattan (where he hosted a show called ‘Hobby Lobby’). He was also raised in Fargo (same one as the Coen brothers movie). Gil Boyne was a keen follower of Elman, and later published his book and seminars. When Gil Boyne moved from California to London I sent him a rare framed print of Elman as a house warming gift, and Gil said on the phone “who was that fella in the photo?” I was amazed that despite having the rights to sell all his stuff, Gil never knew what Dave Elman actually looked like. 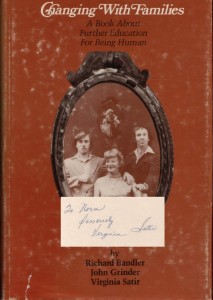 Virginia Satir – one of the three was who studied for the development of NLP (the others were Milton Erickson who I’m a keen fan of, and Fritz Perls, tbe daddy of Gestalt psychology). 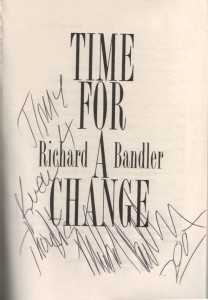 I bought this Bandler (NLP) signed copy for 75p in a charity shop. It says “Time 4 knew thoughts”. More like time for a new book (I find most Bandler stuff is over-hyped bullshit, with the exception of Trance Formations). 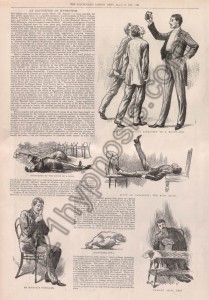 I love this picture! This original news-sheet is full of great retro pics, and is framed on the wall. There’s even a section on animal hypnosis. I hypnotised a guinea-pig once, with a metronome. Little fella just sat there staring into space, and wouldn’t respond when you tickled his cheek (which he normally hated). 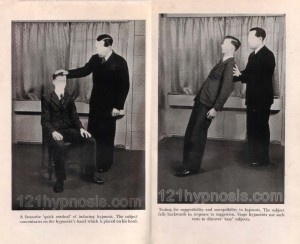 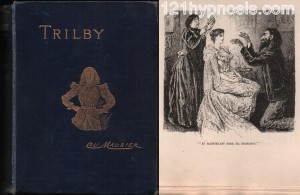 A 1900 edition of Trilby, with the original pictures drawn by the author, George Du Maurier. 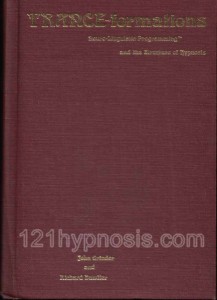 A rare hardback edition of the rare classic book “Trance Formations”. NLPers get all wet about this book, although I must admit it is great. 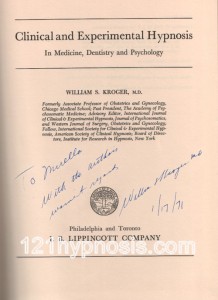 William Kroger’s excellent book signed to someone called Mirella. Its a pretty hardcore book, covering many areas of hypnosis. 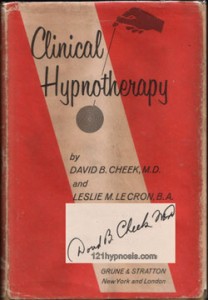 This book was the start of ideo-motor signalling being used as an indicator of subconscious processes. 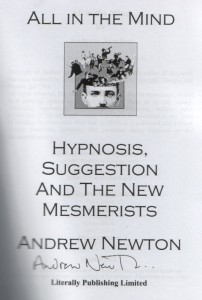 Andrew Newton trained Paul McKenna, which means nothing really. Andrew is pretty scathing of Paul McKenna in this book, saying that he hates his audiences. An interesting book though, very down to earth. 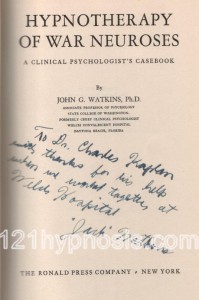 Excellent book, and super-rare. I love that the author John “Jack” Watkins signed this to one of the people who worked at the hospital where the patients from the books case studies were. I really studied this book, analysing the case studies and drawing big charts of dynamic on A3 paper for each one. 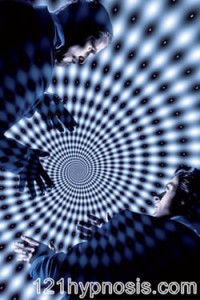 Great hypnotic poster for a great film by Chris Nolan (The Dark Knight), this is framed in my living room. Modern movies are very hit-and-miss, but The Prestige is a terrifically directed film, very intricate, thematic and intelligent. Its one of my all time favourites. I saw it for the first time at Okehamptons great little cinema. I loved that Thom Yorke’s ‘Analyse’ is used in the end credits.

Do you have any rare hypnosis books? Please share!