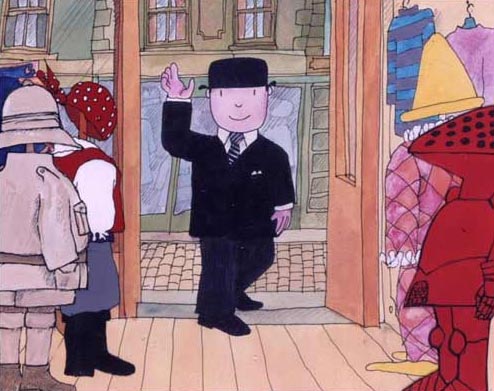 I was having a conversation with my brother about something we call the hidden handbrake, that feeling of something holding you back despite your best efforts.

He had this great idea that we’d touched on before – an idea that was perfectly illustrated by the awesome Mr Benn.

We’ve talked about this barrier a lot, and both wrestled with it in different ways.

Our ratio of effort to output feels ridiculously unfair compared to some people – who seem to just fall into various successes just by being.

There’s nothing more torturing and confusing than watching that first episode of The Apprentice where the contestants talk about themselves and their successes.

Somehow they’ve created fortunes and successful businesses, despite being the most irritating, rude, ignorant and stupid people on the planet.

Ok, maybe that was a bit unfair – it was the shame talking.

Anyway, my brother had an interesting theory about the hidden handbrake.

He said that it related to one of the things he got me for Christmas present, a dvd of Mr Benn. At the time I thought it was just a random quirky gift and that was that – but now I realised there was more to it. Really, I should have known.

For those who don’t know, Mr Benn was an early seventies British children’s cartoon about a this man who wore a suit and a top hat. He’d go into this costume shop, try on a costume, then walk through a magic door and go on a strange adventure related to the costume.

Then my brother explained the analogy.

Its all about identity.

Soon enough, feelings of shame affect your behaviours. Those behaviours, thoughts and decisions feed back into your routine and become automatic, part of your identity.

Not just a self-image, an unconscious image of how you see yourself, talking into account what you deserve and feel worthy of.

But your actual identity.

If you suffer from something holding you back, then maybe you’ve just acquired the identity of someone who is always held back. Having experienced it a few times, its now something you expect for yourself.

Well, like he said, Mr Benn is the solution.

Every time you leave your house to go on adventure, you unconsciously “wear” a costume of personality and expectations. This costume says “I am a person who…” to the outside world, which then responds accordingly.

So basically – you need to change the costume. Act differently. Dress how a person who has the things you want to achieve, would dress like. Behave like they would behave.

Its about becoming more congruent with the goal, rather than letting feelings of shame keep you fixed in place by all the ways they might influence you.

Shame is very short-sited – it only sees the threats and the fears, and becomes very emotionally claustrophobic. How can you really manouvre in a place like that?

Change the costume, step through that magic door and become someone who doesn’t carry the weight of feelings of shame or fear of disconnection.

Its essentially a way of beginning to reverse that scary vicious cycle.

By developing new behaviours, thoughts, decisions or routines, you begin to build more confidence and courage towards that reality, which helps reinforce those new thoughts further still… and so on.

My brother also lent me the book “Rip It Up” by Richard Wiseman, which is basically about “acting as if”. I used to be cynical to the idea of this, because it felt forced and tacky.

People who pretend to be someone they’re not are irritating and appear fragile and vulnerable.

But its far more interesting, and useful than that. The research is incredible – how the tail can wag the dog with really powerful results. In fact, its worthy of a post of its own, so I’ll leave it there.

But for now, remember Mr Benn.

Create your own magic door, and walk through it.