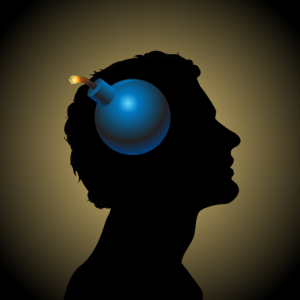 The anxious effects of feeling threatened and “not good enough” are very human, and they really don’t deserve the added shame, guilt or feelings of being “broken” that more ignorant people are quick to suggest. “Pull yourself together!” “Get over it!” “Life’s too short!” Such impatient bullshit and lack of empathy is more often than not coming from a place of shame too.

So many people carry feelings of shame, and fears of inadequacy. Where its deeply repressed, denied and distracted away from, people can be inclined towards that faint hostility and lack of compassion that seems so commonplace.

“I’m anxious too, so why should I help you? In fact it makes me feel better about my own inner turmoils knowing that you’re anxious”.

Soon it becomes almost expected that you shouldn’t share your woes – “no one likes to listen to a moaner, people are only attracted to happy people”.

No one wants to be known as a worrier – for many its a shame-identity, something that people don’t want to be seen as so do their best to hide it (whilst becoming more anxious in the meantime).

Shame can create strong mental and physical effects (there’s also an interesting case study here). Friends and even doctors may trivialize the situation as “all in the mind” or “imagined”.

Its staggering that the imagination and mind can be treated with such little respect, when it’s just as prone (if not more) to suffer as factually as an upset stomach – yet can cause far more acute distress and unhappiness!

The mind and its emotions can become ill as much as the body, causing in the body and mind a state of dis-ease. It’s also unfair to suggest that someone is able to just “get a grip” of their anxieties, when the cause can be so deep that they are incapable of wielding any conscious control whatsoever. It takes over.

Were it that easy, surely people would always do what is necessary and choose to be in a state of constant bliss their whole lives instead.

This feeling of shame can be incredibly isolating, with different results. You may take the approach of “I know I have some issues I’d like to discuss, but there is no one I trust who is truly willing to listen”.

Unfortunately, this unresolved need can soon become dealt with by pushing it deep down, denying there are any issues at all, and just accepting that “that’s the way it is”.

You might then see the symptoms of shame based anxiety as something you deserve, something that’s a part of you, something you’ll unconsciously devote much energy building defensive walls around and protecting in any way you can.

The accumulative negative effects can be life-destroying, for example, being held back from making the most of your potential, or not reaching out and doing something constructive because you’re afraid of the consequences. Just those two examples would be enough to make a potentially successful, happy and fulfilled life barely unrecognisable.

Thankfully, it needn’t be this way, and the huge amounts of psychical energy it takes to maintain and deal with anxiety can be applied to much more positive pursuits and feelings when you learn how.